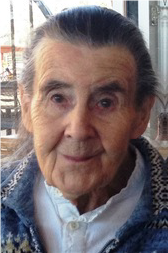 ClaudiaAlsleben Colwell died November 18 in Boulder after a short illness. She was born on July 27, 1930, in Zeitz, Germany to Johannes Alsleben, a doctor, and Anna - Margarete Alsleben(nee Hagemeyer), a nurse. Following the terrors of World War II, she fled her Soviet-occupied hometown with her widowed mother and two sisters, for Goettingen, Germany, in the West. After finishing high school, she earned a teaching degree in Goettingen, then became a beloved teacher in a country school in Lagershausen,
before deciding to continue her own education at the University of Heidelberg. Her hard work and self-sacrifice during these years
made it possible for her refugee family to survive. In Heidelberg, Claudia met her future husband, Jim (James Lee Colwell of Brush, Colorado), tutoring him in German. They were married on December 27, 1957, in Goettingen, and she soon joined her husband in New Haven, Connecticut, where they pursued graduate study at Yale University. She earned a master's degree in German literature and
completed the coursework for her doctorate. She was diverted from her studies by the birth of a son. Her interest in German literature and music was lifelong. The young family returned to Heidelberg, where her husband was employed and a daughter was born, before moving to Boulder in 1965, when Jim took a position at The University of Colorado. Claudia taught at The German School of Boulder. In 1972, the family moved to Odessa, Texas. Claudia taught German at Odessa College, and was active in community affairs, including with the American Association of University Women. When Jim suffered a serious illness, she was strong and steadfast.
With Jim, his health recovered, she retired to Boulder in 1988. She enjoyed flower gardening and the natural beauty of Colorado. She took great pleasure in wild birds and had a special bond with the family's pets. Her family remembers Claudia as a loving and devoted wife, mother, and sister. She was never forgotten by her former students, remaining in Contact with some for many decades. Claudia is survived by her husband Jim Colwell of Boulder; her two children, John Colwell (Tambra Leonard) of Chevy Chase, Maryland,
and Alice Colwell (David Dobbs) of Montpelier, Vermont; three grandchildren, Nick, Olliver, and James; two sisters, Brigitte Alsleben of London, and Ulrike Manegold, of Mannheim, Germany; and several nieces and nephews. Private family services will be held.
Contributions: Charity of the donor's choice.

To plant a beautiful memorial tree in memory of Claudia Colwell, please visit our Tree Store

A Memorial Tree was planted for Claudia
We are deeply sorry for your loss ~ the staff at M. P. Murphy & Associates Funeral Directors
Join in honoring their life - plant a memorial tree
Services for Claudia Colwell
There are no events scheduled. You can still show your support by planting a tree in memory of Claudia Colwell.
Plant a tree in memory of Claudia
Print
Share A Memory
Plant a Tree