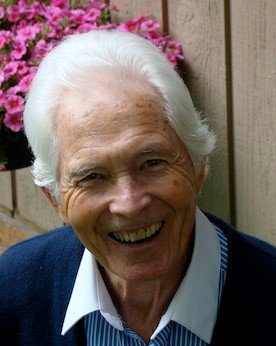 Sam Lanier had a gift, no one ever walked away from time spent with him without feeling special, a smile on their face, a little more spring in their step and a general feeling of all is well with the world.

A loving, soft-spoken, southern gentleman, Sam was born to humble beginnings on June 9, 1929, to Roy and Nettie Lanier in Kenansville, North Carolina. He passed away peacefully at home surrounded by family on March 14, 2019.

His was a happy childhood full of adventures, love, and strong family connections. Sam's dad was a train engineer for a logging firm, and the family home sat so close to the tracks you could feel the ground shake as his father drove the morning and afternoon logging trains past the house, waving his engineer’s cap. Sam's early life was a kaleidoscope of stories and experiences that, when shared later in life, put Tom Sawyer and Huckleberry Finn to the test and kept his whole family enraptured for years. He had two older brothers, Gib and Robert, to pester and protect him, an older sister, Kat, to keep them all in line, and a younger sister, Celia, who he was in charge of, or at least Celia let him think so. It was a big, busy household, in a very small house. So busy, in fact, that his parents hadn’t chosen a name! His birth certificate read simply "Baby Lanier" until he went into the army.

His mind was like a sponge absorbing everything around him. It seemed to us that he had memorized every colorful southern saying or song that ever was. You couldn't be around Sam without hearing and trying to picture, "Happy as a dead pig in the sunshine", "Busier than a one-armed paper hanger", "Full as a tick", "This ain't my first rodeo", and "Give me a little sugar".  His repertoire of , that we are sure are not recorded anywhere, would show up at the sunny breakfast table over the years in the most random and wonderful ways as Sam burst into singing.

Although a happy childhood, it was not an easy one. Sam seemed to know that the world held opportunity for him, but he had to go out and find it. A short stint at Wake Forest University reinforced that he was ready to get out of the South. Like so many others of his generation, he joined the Army. The experience left him hating runny scrambled eggs and any form of camping. It also sent him to Germany where his eyes were opened up to the astonishing life of Europe in the 1950's and the new and elegant world of commercial aviation.

He came home with the goal of turning his innate talent for understanding how things work into a career. He headed off to Miami Beach, which at the time was half the size of Boulder, enrolling at Embry-Riddle Aeronautics school. His graduation landed him a job at Pan Am Airways, at that time the largest international airline in the world, and unofficially the flag carrier of the United States. He loved his globetrotting life.

Sam was a dashing figure, witty, with a big smile and a thick head of prematurely gray hair,  even in his late twenties. He soon met one of Pan Am's first five foreign-born stewardesses, Eva Maria, born in Hamburg, Germany. She too loved the glamorous life of international travel and the two were fated to be together from their very first date touring the Coliseum in Rome during a two-day layover on a round-the-world flight in 1958.

Even though marriage in those days was a career ender for women, love won out and Sam and Eva tied the knot. They set up their family home on Long Island, as Sam continued to fly for Pan Am on a steady stream of round-the-world flights from Idlewild Airport, now known as JFK. 1963 brought the opportunity of working for Pan Am in Germany as Pan Am became an important part of connecting West Berlin with the rest of the world. Joining Pan Am's Inter-German Service (IGS), Sam and Eva moved to Eva's hometown, Hamburg, and Sam spent his days flying between West Berlin, Frankfurt, Munich, Hamburg and a host of other European cities. Happy years in Germany allowed the family to thrive, the joy of two daughters Christine and Colleen, along with a wonderful mother-in-law, "Omi", and "Candy", a female, poodle kept Sam outnumbered but blissfully content and "spoilt" surrounded by his beautiful women.

A gorgeous April day in 1976 brought Sam and his family over Davidson Mesa on a spring break trip to check out US colleges for oldest daughter, Christine's, college education. Eva captivated by the beauty of the snow-covered mountains, blue skies, and quaint city down below said "Chrissy, you can decide to go to school wherever you want to go, but we are going to move the family here" and, in July 1977, they did.

For the next decade, Sam was one of the first "transcontinental commuters". He would spend four weeks on-duty flying in Berlin then return to Boulder for four weeks of time off. In 1984, he retired from Pan Am and his second career was simply to enjoy his life and his family. Sam spent the next four decades loving his views of the big blue skies, mountains, and openness of Colorado.

Sam loved puttering around his property on the mesa overlooking Boulder and his son-in-laws, Erik DeBoer and Kent Zimmerman were the beneficiaries of his handiness with many a free fix and a huge garage full of tools of every kind and shape. Grandkids, Lars, Stefan, GT and Shelby were simply in awe and in love with the patient, smiling "Opi" who spent so much time with them as they were growing up.

After losing Eva 16 months ago, Sam started to feel the wear and tear of nearly nine decades of a well-lived life and, although his mind was sharp as a tack, his legs and heart started to frustratingly betray him.

Sam's was a very good life, a long life, a well-lived life. He will be missed and is missed already, but we are all comforted that he and Eva are back together again.

A private family service will be held at Fort Logan National Cemetery. His wishes to all who knew him over the years are simple, "Spend a little time with each other at a sunny table full of pancakes, bacon, grits, good coffee and laughter."

The family wishes to thank TRU Community Care Hospice and Tracy for all they did to help Sam stay in his beloved home right until the very end, and Bama who brought out the laughs and strong voice even on Sam's last day.

To plant a beautiful memorial tree in memory of Samuel Lanier, please visit our Tree Store

A Memorial Tree was planted for Samuel
We are deeply sorry for your loss ~ the staff at M. P. Murphy & Associates Funeral Directors
Join in honoring their life - plant a memorial tree
Services for Samuel Lanier
There are no events scheduled. You can still show your support by planting a tree in memory of Samuel Lanier.
Plant a tree in memory of Samuel
Print
Share A Memory
Plant a Tree