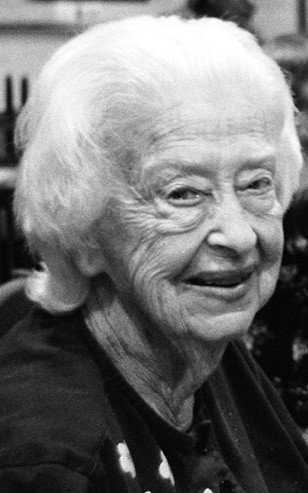 Barbara Lela Dunham Adamson died peacefully in her sleep on February 13, 2019, at Highland Trail in Broomfield, Colorado, at the age of 100. Born in Los Angeles on August 2, 1918, she graduated from Santa Monica High School in 1936; she received an Associate in Arts degree from Santa Monica City College and went to work as an executive secretary for Douglas Aircraft Company. She lived for a time in Detroit, Michigan, helping secure contracts with the auto makers for subassemblies for aircraft prior to World War II. She met Raymond F. Adamson at Douglas, and they were married June 12, 1942. Following the war, they moved to Reseda, California, in the San Fernando Valley. Barbara gave birth to their only son, Stanley Errol, on June 19, 1948. Ray worked as an architect and builder. Barbara helped supplement income by addressing envelopes, a job she could do at home, in addition to helping with the building business.

Barbara volunteered with the PTA at Bertrand Avenue School in Reseda, and enjoyed it so much, she eventually became the Parliamentarian of the California Congress of Parents and Teachers. In 1963, the Adamsons moved to Tarzana, California. After upgrading the existing house, Ray built several additional custom homes as he developed the Tarzana property. Selling this property, and after a brief sojourn in Canoga Park living in the original house they had built in Reseda and moved, the Adamsons settled permanently in their mountain home in Crestline, California, in 1973 (?). Barbara used the skills she had learned as a secretary to make money taking minutes for professional organizations in the mountain communities, and eventually spent twenty-four years in the offices of the Lake Arrowhead Community Services District, retiring at age 82 in 2001. Barbara and Ray were ordained elders and deacons at Crestline Community Church, with Barbara serving as Clerk of Session, and as a commissioner to Riverside Presbytery. She served as Temporary Stated Clerk of the Presbytery, and on the Permanent Judicial Commission. She was a commissioner to General Assembly in Atlanta, Georgia, in 1983, and witness to the historic merger of the United Presbyterian Church in the U. S. A. and the Presbyterian Church, U. S.

After Ray’s death in 1999, Barbara had the thrill of a lifetime travelling to Italy to be a witness at her grandson Michael’s wedding to Gina Pietrantoni in Ovindoli, Abruzzo. She moved to Lafayette, Colorado in 2002, to be near Stan and his wife Clare. She became active in St. Andrew Presbyterian Church in Boulder, where Stan was the Pastor, volunteering in the office and serving on several committees. She also served as temporary Stated Clerk for the Presbytery of Plains and Peaks.

Memorial services will be held at St. Andrew Presbyterian Church, Boulder, Colorado at 10 a.m. on Saturday, March 23, 2019. Ashes will be scattered in the St. Andrew Memorial Garden and at sea off Santa Monica, California, later. Please offer memorial gifts in lieu of flowers.

In lieu of flowers, gifts in her memory may be given to St. Andrew Presbyterian Church, Boulder, Colorado, and will be designated to the work of the Colorado Council of Churches.

To send flowers to the family or plant a tree in memory of Barbara Adamson, please visit Tribute Store
Print
Saturday
23
March