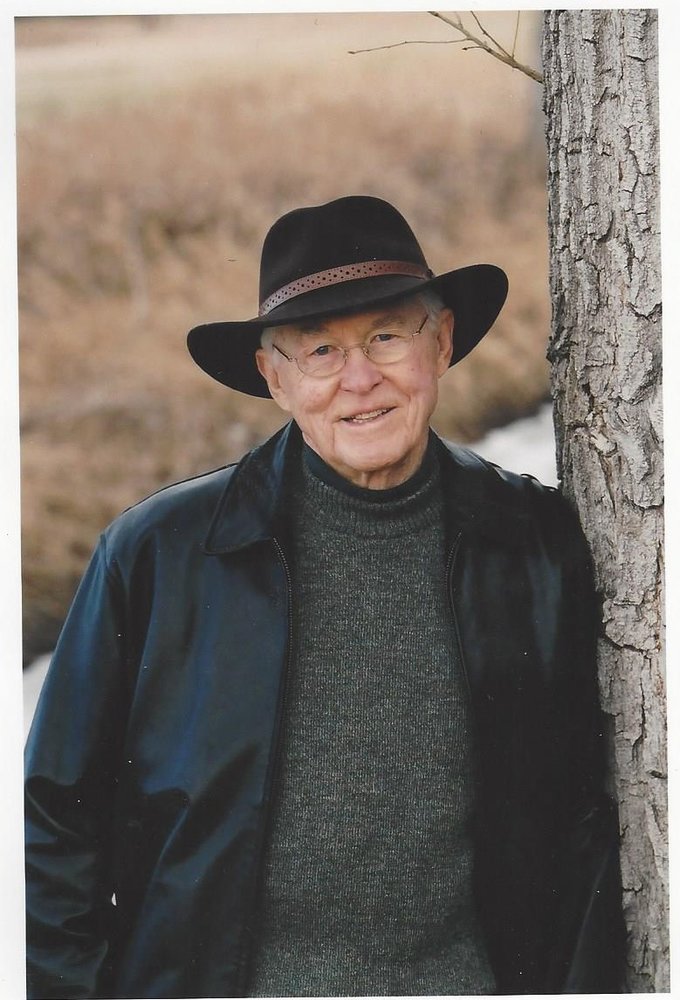 Edward Patrick “Ed” Trumble died at peace on December 26 in Longmont, Colorado at the age of 94.

A funeral Mass is scheduled for January 5, 10:00 AM at St. Francis of Assisi Catholic Church in Longmont, where Ed was a faithful member. Ed was a lifelong, dedicated Irish Catholic. Father Frank Maroney will offer the Mass. All are welcome to attend and celebrate Ed Trumble’s life. Reception and remembrances to follow.

Ed was born on November 1, 1924 in Havelock, Nebraska to Paul and Gertrude Trumble, who ran a farm and livestock operation. Beaten by the Dust Bowl, the Great Depression, and Paul’s premature death when Ed was only nine, Gertrude and her boys were forced off the land in 1939. They moved to Lincoln, Nebraska with only $400, the pitiful proceeds from the sale of their remaining livestock and farm equipment. Gertrude opened a boarding house. Ed worked odd jobs and graduated from Northeast Lincoln High School.

In 1941, when war broke out, Ed wanted to be a navy pilot but failed the eye exam. Based on his high test scores, the military assigned him to the Army Specialized Training Program in engineering.

As the war in Europe demanded more ground troops, he and his ASTP buddies ended up serving as privates in the 99th Infantry Division from 1943 to 1945. His 3rd Battalion, 395th Infantry Regiment, received the following Presidential Citation for their role in the Battle of the Bulge:

… for outstanding performance of duty against the enemy during the period 16 to 19 December 1944, near Hofen, Germany… For four successive days the battalion 800 held this sector against combined German tank and infantry attacks…the men fought vigorously... Outnumbered five to one, they inflicted casualties in the ratio of eighteen to one…prevented the German break-through and destroyed seventy-five percent of three German Infantry Regiments. The courage and devotion to duty displayed in the face of overwhelming odds were in keeping with the highest traditions of the military service.

In January 1945, a German artillery shell exploded near Ed. He was wounded and evacuated to England for recovery. The war ended later that year and Ed returned home with his three brothers to a very relieved and grateful mother. In the years following, Ed would recount his wartime vow, “If I live through this war I will never complain about anything again.”

Ed graduated from the University of Nebraska in 1949 with a degree in Business Administration and was recruited by Hallmark Cards of Kansas City, but declined the job. He moved to Denver and got a job with Western Live Stock magazine, where he met part-time artist and future business partner, Robert Lorenz. They shook hands and with four western Christmas cards, started their own greeting card business, The Lazy RL Ranch. They sold out their entire stock to ranchers that first year by mail order through an ad in Western Live Stock magazine.

In 1951, Ed met Patricia Jane Ewell of Madison, Wisconsin. At the time she was working as a Denver-based stewardess for United Airlines. She also had a Master’s Degree in French from the University of California at Berkeley and was an avid horsewoman. They were married in 1952, raised four children, and divorced in 1981. Pat died of lung cancer in 1995 at the age of 68.

Ed and Bob had different visions for the company. In 1964 they decided to split the business and go their separate ways. Ed named his half Leanin’ Tree. Within a year Bob was diagnosed with cancer and died soon thereafter.

Under Ed’s leadership, Leanin’ Tree grew from a small, direct mail, western Christmas card business to become one of America’s leading card companies, now annually publishing over 700 artists on over 6,000 cards and gift products. In the 1990s Ed began transferring responsibility to his four children who drove Leanin’ Tree forward. For the past 13 years in a row, Leanin’ Tree has been ranked number one in greeting cards by a widely respected survey of independent retailers.

In the early years, the process of finding art for all those western greeting cards was leading Ed into many of the finest western art galleries and Ed was soon to become a big supporter and friend of many artists and gallery owners. Naturally, he started collecting art himself and by 1974 when the company moved to its present location in Gunbarrel, near Boulder, he opened the Leanin’ Tree Museum of Western Art. The museum grew from there and it was Ed’s pride and joy to show his art collection off to hundreds of thousands.

In 1983, Ed met Lynn Dickens Courtley, a fourth generation Coloradan from Longmont.  Part of a prominent northern Colorado ranching family, she was an accomplished horsewoman. Lynn grew up with a passion for singing and the world of art. She graduated from the University of Wyoming with degrees in Education and Vocal Music. Ed saw Lynn’s three children through their teenage years, helping to raise them as if they were his own. Lynn assisted Ed in the broadening of the Leanin’ Tree Museum collection with the creation of the Sculpture Garden.

Among Ed’s numerous awards and recognitions are the following.

Additionally, Ed has been frequently recognized and honored by various western art groups and museums, sometimes serving as a judge at western art exhibitions.

Ed was a Boy Scout as a youth in Nebraska, and he participated eagerly with his sons, Tom and Tim, in their Boy Scout adventures.
He believed fervently in the Boy Scout values.

A strong powder skier, Ed was proud to have heli-skied nearly two million vertical feet in the Canadian Rockies, many of those trips with his good friend, Joe Heck. Skiing was an important part of Ed’s life for several decades, producing countless treasured memories with family and friends in the spectacular Colorado Rockies.

In 1977, Ed and fellow western art enthusiast Paul Weaver bought a 39-foot sailboat, sailed it to Hong Kong, and then the 1978 South China Sea Race from Hong Kong and to Manila. On a sailing trip through the Solomons in 1979, Ed suffered a heart attack while scuba diving on a sunken World War II P-38 fighter plane. Against the advice of his doctors he decided not to pursue heart surgery and embraced a stringent regimen of diet and exercise.

Inspired by the exemplary fitness of his close friend Fred Pruett, in 1983 Ed trained rigorously for the Bolder Boulder 10K and finished with a time that matched his age—59 minutes.

Ed’s writing was vivid and engaging, frequently revealing a hearty and earthy sense of humor. His many eulogies and memorials for friends and artists were always deeply appreciated and of course, he wrote many sentimental and humorous greetings for his cards. His major writing projects, complemented with meticulous research
material, included

A View From The Bottom, autobiography of his experiences
in WWII

From Guadalcanal to Farewell Harbour, 2018

Ed’s greatest publishing achievement is his 500-page coffee table book The Story of Leanin’ Tree: Art and Enterprise in the American West, 2008.

In lieu of flowers, please send donations to Longs Peak Council of the Boy Scouts of America, or to University of Nebraska Foundation, designated for the Ed Trumble Fund for Entrepreneurship, 1010 Lincoln Mall, Suite 300, Lincoln, NE 68508.

Condolences and remembrances may be sent to
EdTrumble@LeaninTree.com.

The family would like to thank the staff and devoted caregivers at The Carillon at Boulder Creek. In particular, Ed wished to recognize Drs. Merritt Horning, Lawrence Horwitz, David Tanaka and Chuck Rogers for their many years of wise and attentive care. The family would also like to thank TRU Hospice Care Center for their tenderness and compassion.

To send flowers to the family or plant a tree in memory of Edward Trumble, please visit Tribute Store
Print
Saturday
5
January