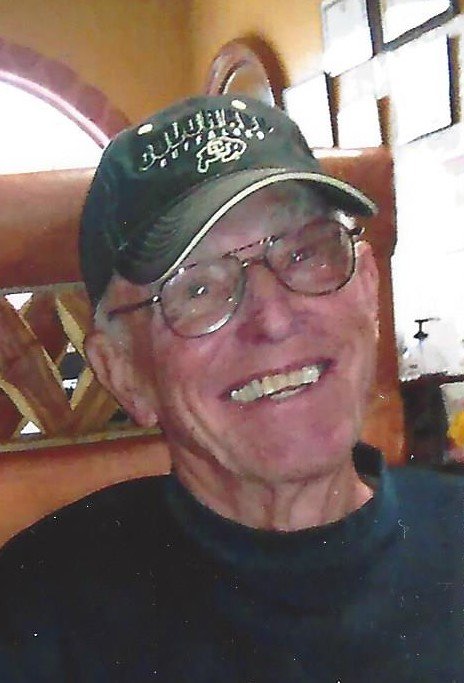 Born May 31st, 1934 in Erie, CO to parents George Frederick Hoos and Edna Christine Pierson Hoos, George grew up in Boulder, his educational path taking him from to Baseline Grade School to Boulder High School (Class of ’51) to the University of Colorado, where he earned a B.A. in Conservation Education and, in 1968, his M.A. in Geography. George served as a sergeant in the United States Marine Corps from 1957 to 1959 as radioman for a helicopter squadron based out of Yokosuka, Japan. After his military service, George returned to Boulder and went on a blind date, an idea unbeknownst to George and initially hatched at a demolition derby. Two Denver girls sat in front of two Boulder boys; soon thereafter, it was suggested that the girls’ friend meet the boys’ friend (fresh out of the Marines). After the first date, Jean’s mother told her, “You can marry that one.” Her assessment turned out to be spot on: George married Norma Jean Reynolds on August 20th, 1960 in Lakewood, CO. The three Denver girls wed the three Boulder boys, and they’re all still betrothed. But before George tied the knot with Jean, he warned her, “Love me, love my golf.”

Like many avid golfers, George was introduced to the game while working as a caddy. He played throughout his youth and for C.U.’s men’s golf team. In addition to teaching social studies at Fairview High School, George coached football, wrestling and golf, the latter his primary passion. One former player describes George as the type of coach who not only taught the players the rules of golf, but also how to apply those guidelines to life. He affected the lives of thousands of students from 1960 to 1990. George was an icon in the Colorado golf community, especially here in Boulder. He volunteered at Flatirons Golf Course on summer Fridays teaching local youngsters the intricacies of the swing, the patience for the game. Further, George was instrumental in promoting women’s golf in the area for decades. He was a longtime member and past president of the Golf Collectors’ Society. To commemorate George’s fifty-year anniversary as a C.U. letterman in golf, he was inducted as a C.U. Living Legend a few years ago, an honor his brother, Allen, will receive at this season’s C.U. vs. A.S.U. football game. George is also a member of Colorado’s Alumni C Club, an association of former letter winners. When not on the links, George loved the outdoors, often referring to himself a farmer in a golfer’s body. George even had a champion pig at the county fair when he was younger, and he enjoyed home landscaping as he grew older. As a young man, he used to earn money trapping muskrats in the Boulder creeks; he was a member of the Boulder Fish and Game Club. The kids’ fishing pond in Boulder is named for George’s uncle, Evert Pierson.

A memorial service will take place at Mount Calvary Lutheran Church, 3485 Stanford Court, Boulder, CO 80305, on Sunday, October 14th, 2018 at 1:00PM, officiated by Pastor Sara Wirth, with a celebration to follow. Military Honors will be presented by the United States Marine Corps. Part of three generations of Hoos at the church, George was the oldest living confirmand at Mount Calvary, and his grandfather dug the first shovelful at the groundbreaking for the present church building. The Hoos family thanks you for your kind thoughts, loving words and heartfelt prayers.