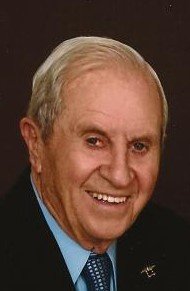 Dale Wendell (“Matty”) Mattson, long-time Boulder and Maui resident died August 16, 2018 at the age of 95. He leaves behind his wife, JoAnn Mattson with whom he recently celebrated their 70th wedding anniversary; his four children, Mary, Judy, Mike, and Tom; eight grandchildren and two great-grandchildren.

Matty was born November 24, 1923 in Assaria, Kansas, a very small farming town where his childhood during the great depression influenced an appreciation for all of life’s gifts. The day after the attack on Pearl Harbor, he enlisted in World War II’s Army Air Corp (which later became the Air Force) and became a P-38 Lightning fighter pilot, first stationed in Coffeyville, Kansas where he met his wife. After Lieutenant Mattson had served out the war, he attended Kansas State University, playing point guard on the basketball team and serving as the Sigma Alpha Epsilon president. Despite graduating with a business degree from that university, marrying, and having four children in Kansas, Matty packed up his family and moved to Boulder in 1964 without the security of a job. After quickly obtaining a real estate license, a store he was showing on university hill caught his eye. He soon opened Mattson’s on the Hill, a retail clothing store that remained a fixture on the hill from 1967 through the 1980s. Discounting his affiliation with most things Kansas, Matty became an avid Colorado Buffalo fan, having twice served as the president of the Boulder Buff Club and focusing great energy and time on the program. Matty also opened the first of two Mattson Furniture stores on the Pearl Street Mall in 1974, built Baseline Towers across from the CU Law School in 1975, and opened another retail clothing store in Maui, Mattson’s by the Sea, in 1977.

Matty and JoAnn more or less moved permanently to Maui in 1980 although he would spend the extended summers in Boulder, finding that golf was easier in sunshine than snowfall.

Matty was an active member of the United Methodist Church in Boulder, Boulder Rotary Club, Boulder Country Club, Lahaina United Methodist Church, Lahaina Yacht Club and the unnamed regular coffee meetings with local business people on the Hill and downtown Boulder. He will be remembered not only for his quick wit, humor, great stories and aloha, but for genuinely welcoming every person of any background into his heart and home. He will be missed.

A private family graveside service will be held at Fort Logan National Cemetery. A memorial service will be held on Wednesday, August 29, 2018 at 1:30 PM at Mountain View United Methodist Church, 355 Ponca Place, Boulder, Colorado 80303. Military honors will be presented by the United States Army.