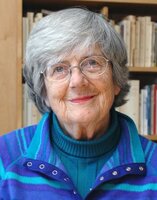 Longtime Boulderite and University of Colorado professor, Graziana Lazzarino, passed away on June 29th, 2021 at Balfour Assisted Living in Louisville, CO. She was 90. Born November 6th, 1930 in Genova, Italy to parents Pietro and Isabella Cagno Lazzarino, “Grace” grew up and studied in the city of her birth. She graduated from Liceo Classico Colombo, then earned her Doctorate in Italian Literature from the University of Genova. Grace further studied at the Universities of Heidelberg, Frankfurt and Lyon before moving to the United States. Once here, she taught at the University of Nebraska, Wellesley College, Middlebury College, Central Connecticut State College and the University of California at Santa Cruz. In 1964, she began her illustrious career at the University of Colorado at Boulder as an assistant professor in the Department of Italian and French. Grace became a full professor in 1980, remaining until 2011. She is the author of Prego, one of the most popular and successful textbooks for the teaching of Italian here in the U.S. (currently in its sixth edition), and has also written and edited Da Capo, Per Tuti i gusti, and, more recently, In Giro per I’Italia (2001). Her works mostly focus on the teaching of the Italian Language and in Pedagogy, but Graziana’s knowledge extended well beyond her Italian roots. She also spoke French, Spanish and German. When not in the lecture hall, Grace enjoyed world travel and the mountains of her adopted home state. An incredibly independent and brilliant woman, Grace served in many leadership roles throughout her life. As a resident of Balfour Assisted Living, she savored every opportunity to assist, even going so far as to help the chef correct French and Italian spellings of menu items. Graziana is survived by her niece and nephew, Elisabetta and Paolo Rivera, in Italy. Grace brought language and light to her students for over half a century; her legacy solidified in their admiration for her and the treasures she shared. Rest in peace, Grace. You will be missed.