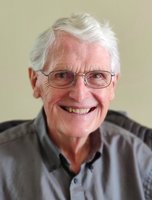 Beloved father and grandfather, Edwin Clayton McDowell, Jr., 78, died Friday, April 2, 2021 at his home in Lafayette, Colorado due to complications from Stage 4 Esophageal Cancer. A proud Colorado native, Ed was born in Greeley. His father, Edwin C. McDowell, Sr., was the pharmacist and proprietor of The Greeley Drug Company. His mother, Dorothy Lucille Wagner, was one of the first female employees of Home Light and Power. Ed loved learning and was an enthusiastic student. He graduated from Greeley High School in 1961. In addition to excelling academically, he played starting guard on the state champion football team and was the state champion in the discus throw. Ed attended the University of Colorado-Boulder for one year before transferring to Colorado State University. At CSU he was a member of the Alpha Tau Omega fraternity and served as ATO’s president. In 1965, Ed received his Bachelor of Science degree in Civil Engineering with high distinction from Colorado State University and was chosen as the Outstanding Civil Engineer. Ed married Kay Short McDowell June 6, 1964 at St. John’s Episcopal Church in Boulder, CO. After their graduation from CSU, Ed and Kay moved to the Pacific Northwest, where Ed enjoyed work for Peter Kiewit and Sons Co. supervising bridge construction projects in Oregon, Washington, and Idaho. His role as project manager was very challenging, very exciting, and immensely fulfilling, but hardly conducive to raising a family. They would often learn on a Friday where they were moving to begin a new job on Monday. In 1968, Ed and family returned to Boulder. There he began work with his father-in-law, Harold Short, the Chairman and CEO of the Flatiron Companies, while preparing to attend graduate school. The family moved to Cambridge, MA in 1969 so Ed could attend Harvard Business School. Upon graduation in 1971 with a Master’s degree in Business Administration, they returned to Boulder. Ed spent the majority of his career serving as the President of Flatiron Sand and Gravel and Co-developer and Managing Partner of Flatiron Park in Boulder. Ed derived great satisfaction from reclaiming land that had been mined and giving it new life. He was especially proud of the White Rocks Nature Preserve reclamation project in Boulder County along with the many gifts to Open Space made by Flatiron in Boulder and Fort Collins. Ed lived his belief in Service Above Self. He used his passions and skills to serve on numerous boards including the National Ready-Mixed Concrete Association, Colorado Rock Products Association, First National Bank in Boulder, CU’s College of Music Advisory Board, TRU Community Care, YMCA of Boulder County, and the CSU Foundation. He assumed leadership roles in Atonement Lutheran Church, Boulder Chamber of Commerce, Boulder Rotary (as president and 49-year member), and the Urban Land Institute (ULI). Kay was Ed’s constant companion and loving wife of 47 years until she died in December of 2011. Kay and Ed raised their family in Boulder where they were leaders in many organizations in the local community. They were great supporters of their kids and grandkids. If there was a game to watch or a concert to attend Ed and Kay would always be there cheering them on. Ed is survived by his children and their spouses as well as five grandchildren: Bill McDowell of Lafayette, Beth McDowell Baldwin (Jason), Kendall and Clayton Baldwin of Boulder, CO; and Mike McDowell (Kara), Henry, Maria, and Caroline McDowell also of Boulder, CO. Additionally, Ed is survived by his brother Jim (Barbara) McDowell of Yarmouth Port, MA, as well as numerous cousins, nieces and nephews. His wife, Kay Short McDowell, older brother, Ted McDowell, and his parents preceded him in death. Due to current COVID restrictions, the family will hold a private memorial service with plans for a Celebration of Life service later in the year. In lieu of flowers, the family suggests donations be made in his name to TRU Community Care, 2594 Trailridge Drive East, Lafayette, CO 80026 or the YMCA of Northern Colorado, 2800 Dagny Way, Lafayette, CO 80026 Throughout his battle with cancer, Ed was at peace with the fragility of life. He had a steadfast faith that gave him strength as he passed through his final chapter peacefully. Ed had confidence that, ultimately, God was in charge of his life. His was a life well lived. Ed will be greatly missed. For online messages to the family visit www.murphyfuneraldirectors.com.