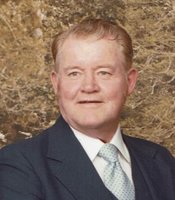 John Collier Woodis, age 96, of Arvada, Colorado, passed away Thursday, January 28th, 2021 at home on the family farm. John was born on March 2, 1924, in Deer Trail, Colorado. He was the son of Clark and Ruth Woodis. He grew up in Deer Trail along with his two sisters, and three brothers, Margaret, Dorothy, Warren, Tad and Bill. John loved his family. He shared several childhood stories. Tragically his mother Ruth suffered a stroke while she was refereeing a softball game and died when John was 8 years old. This left a lasting impression on John and changed the course of his life. In 1942, John graduated from Deer Trail High School. He went to the University of Colorado, where he studied engineering and played baseball. During the World War II years, John served in the Merchant Marines on the ship S.S.D.G. Scofield. John then went to the Army at Fort Francis E. Warren Training center in Cheyenne, Wyoming (Warren Air Force Base). John married Donna Hughes on July 5th, 1947. John and Donna had 4 children: Rocky, Larry, Nancy, and Bobby. After they were married John and Donna lived on a dairy farm. Later, they bought their own dairy farm north of Byers. Over the years they worked and made several improvements. John and his family worked milking the cows, putting up the hay, cutting corn, plowing the fields, and hauling the barley. The children learned to work alongside their parents. They also enjoyed music and playing sports. John and Donna lived in Byers raising their family in the country, until the devastating flood of 1965. John and two of his children survived the flood hanging on to a tree for an entire night. John grew up farming and taking care of his cattle for most of his life. He spent time working at the Loveland Ski Area. He was chairman for MEDA (Mountain Empire Dairyman’s Association) and on the Board of Directors. On June 8th, 1973 John married Betty “Jean” Spencer Zehnder. John found his best friend in Jean, and they lived happily in Arvada the remainder of their lives. John’s extended family now included 7 more children. John and Jean enjoyed their families and enjoyed life. At this time, they worked together running their business, Depend-A-Bull Semen Service. This allowed John and Jean to travel the countryside together. They made many lifetime friends along the way. John loved life. He loved farming, cattle, fixing equipment, singing, dancing, playing the sax, or piano, fooling around with his mother’s mandolin, or strumming a few chords on a guitar. He enjoyed fishing and hunting, John and Jean went fishing every summer for over forty years. John and Jean liked to travel. They visited six continents and all fifty states. They traveled with their family six-packs. Bill and Vi, George and Margaret or their other family 6-pack Wally and Beverly, Ken, and Rita. John was good at sports. Baseball was his favorite and he could hit the ball a mile. He was once scouted by Pepper Martin of the New York Yankees. When he was in his eighties, he played in the senior softball world series. Along with family and friends John had a good time tailgating at CU football games, home and away for many years. Music was truly in John's bones, he was a wonderful musician, he could play anything by ear. He was a member of two Barbershop Choruses: The Boulder Chapter and The Denver Tech Chapter. He sang in a Barbershop quartet with his dad and brothers and provided dance music at the Brown Derby in Deer Trail with his brothers Bill and Warren. Everyone always enjoyed when he started singing and playing at the piano. Until John we never knew Christmas Carols included “Up the Lazy River” and “Shanty Town” or imitations of Louis Armstrong. John truly lived a wonderful life. He died peacefully at his home surrounded by all who loved him. John is survived by his daughters Nancy Worster of Strathmore, CA ; Sharon Woodis of Aurora, CO; Diane Ossenkop of Lincoln, NE; Carol (Stan) McGarvey of Bellvue, CO, and Barbara Kirkmeyer of Brighton, CO; his sons: Larry (Erma) Woodis of Cogan Station, PA; Bobby (Jane) Woodis of Sidney, NE; Rudy (Carol) Zehnder of Lakewood, CO; Ernie Zehnder of Johnstown, CO; Brian (Terri) Zehnder of Arvada, CO; and Stephen (LuAnn) Zehnder of Greeley, CO; He is survived by his brother and sister in law, Bill (93) and Vi Woodis. Also, 26 Grandchildren, 38 Great-grandchildren, 2 Great, Great-grandchildren as well as several nieces and nephews. He was preceded in death by his parents, his wife, his sisters and brothers Warren, Donald, Margaret, Clark Cummings, and Dorothy, and his son Rocky Woodis. Ceremony and reception to be held at the Church Ranch Event Center, 10200 Wadsworth Blvd, Westminster, Colorado, 80021 Thursday, February 25th, 2021 11:00 am to 2:00pm