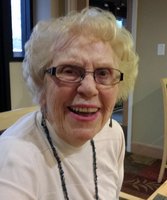 Alice Jean (Matthews) Munford, age 94, of Boulder CO, died Monday, January 25, 2021, of COVID19. She is survived by Steven & Michele Matthews (son & daughter-in-law), Kellie Matthews (daughter), and Khamryn Snow (granddaughter), all of Boulder CO. She is also survived by her brother Johnny Farnsworth of Memphis TX, and her sisters Lola Kerr of Midland TX and Marjorie Garrison of Spokane WA. She was previously married to Bert Warren Matthews (d. 1975), and John Robert "Bob" Munford (d. 2015). Alice was born on a farm in rural Lipscombe County Texas to Fred and Bernice Farnsworth. She was one of 9 children, and at various times resided in Texas, North Carolina, New Mexico, Kwajalein (Marshall Islands), Illinois, Colorado, and California. During her lifetime she experienced the Great Depression, the Dust Bowl, the New Deal, the creation of Social Security, a World War, the formation of the UN, the development of atomic weaponry and energy, the Cold War, the Space Race, the Kennedy assassinations, the tumultuous 1960s, the Great Recession, and many other landmarks of more recent history. She considered herself a feminist and was at one time a member of the League of Women Voters. She saw the advent of television (invented by another Farnsworth, but no relation we know of!), the invention of frozen food, the creation of Disneyland, and a host of other amazing events. Alice received an Associate Degree from Wayland Baptist College in Plainview TX. Before she married Bert, she worked for the Pacific & Santa Fe Railroad as an accounting clerk, and afterward, she worked as a homemaker for many years. After she was widowed in 1975, she worked as an office manager for an estate planner in Boulder CO. After her retirement she enjoyed gardening, hiking, socializing, dancing, world travel, spicy burritos, salted peanuts, Rice Krispie Treats, and Mimosas (DEFINITELY Mimosas!). She did volunteer work for the Niwot Senior Advisory Council, the Boulder Public Library, and Boulder Community Food Share, as well as being a member and officer of the Boulder Elks Club for many years. A memorial may be conducted once public gatherings are able to be held again.