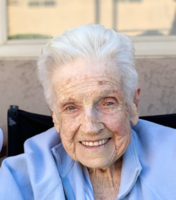 Ann Shaffer tribute Ann Shaffer, former long-time resident of Boulder, Colo., died Aug. 20, 2020 in Phoenix, Arizona. Ann Lucille Marnell was born April 5, 1919 in St. Joseph, Missouri, the youngest of eight children, to Irish immigrants John Marnell and Nellie Toohey Marnell. She was proud of her 100 percent Irish heritage, and was able to visit Cork, Ireland to see her parents’ first home and kiss the nearby Blarney Stone. Ann took flight as a songbird early. By the 8th grade, she was performing live weekly on KFEQ radio in St. Joe — two 15-minute segments accompanied by piano, then with a large orchestra on an hour-long Sunday program. After graduating from the Convent of the Sacred Heart high school at 16, she moved to Kansas, to live with her oldest sister and attend what was then known as Wichita University. But her lifelong passion for music and radio changed that plan. She was introduced to the two men who were starting the new radio station KANS. Ann auditioned, and was promptly hired to perform on “Studio Party,” a live — it was all live, in 1936 — hour-and-a-half show. Her sister wasn’t happy with that, so Ann sang under the name Lana Lane. She also worked as the station’s secretary and “traffic manager,” keeping the calendar on every minute of programming that went out over the air — all for $10! While working at KANS, she met a young salesman who worked there named Russel William Shaffer. They married a year later, on Jan. 16, 1939. World War II soon intervened. Russ served in the U.S. Navy, while Ann worked as a civil-service typist. After the war, they moved to San Francisco, where after a short time as a salesman with KGO, Russ accepted an offer to help Herb Hollister and Jack Todd — the same men who hired Ann and Russ at KANS — to help them start their new station KBOL in Boulder. Ann’s first impression of Boulder at the time: “It was cold! But once I adjusted to the city, I absolutely loved it.” KBOL went on the air Feb. 15, 1947. Hollister later decided Boulder wasn’t a big enough market to support an independent station. Against Herb’s advice, Russ bought KBOL. “We really went out on a limb to do that,” Ann recalled later. Ann had been busy raising the couple’s three boys for many years when Russ came to her one day and asked her to fill in as host of the KBOL women’s show, “Petticoat Patter,” whose host left to have a baby. “He talked me into doing this show, quote, until they had a replacement,” Ann remembered wryly. That was in 1964. Ann quickly turned the show into more than just recipes and newswire clips. Soon local business owners were knocking on the door, hoping to advertise to her growing audience. “Once I had sponsors, I was really important material around (KBOL), because they were making money,” she said with a laugh. She would go on to host the show for the next 28 years. In 1972, she wanted to change the name, and held a contest with the winner being the listener who submitted the best name. The contest winner was actually drawn from a hat because ”From Now ‘till Noon” was Ann’s own idea. She always said “It was the only contest I’ve ever won”! Ann’s interviews — always women — included Erma Bombeck and Joan Crawford, but her favorite was Betty Ford, who was in Boulder for Community Hospital’s Fundays in 1982. Ford later sent a personal note to her saying, “it was one of the most enjoyable interviews I’ve ever given.” Ann was the long-time public-service director for KBOL. She served as president of the Rocky Mountain Chapter of American Women in Radio and Television. In 1973 the General Federation of Women’s Clubs gave her an award for her outstanding work in broadcasting. Ann was always generous with her talents. She never said no to a request to sing and play piano at a party, or charity events. The CU Festival Chorale, Boulder Chorale, and the Boulder Concert Choir — a joint effort with CU — were among the many groups she sang with. She was deeply involved in the community throughout her life, contributing her time, talent and resources as a member of the United Bank of Boulder board of trustees and board member for the local March of Dimes chapter. She served on the Leadership Boulder and other committees for the Boulder Chamber of Commerce, was a member of the Boulder Community Hospital Auxiliary and a volunteer for Meals on Wheels and Boulder County United Way. She helped with a fund drive to renovate CU Boulder’s Macky Auditorium. She raised the most money for the Boulder Philharmonic radio-thon on KBVL, the Shaffers’ FM station, and won the “bronze baton.” She always said directing them was the real award. Ann and Russ were avid supporters of all things University of Colorado, and KBOL was the first to broadcast CU football. But faith and family were always the most important things to Ann. She was a long-time, member of Sacred Heart of Jesus, where she served as president of the parish council, and was a member of the choir for years. Despite all she was doing, she rarely missed her boys’ ball games, and she wasn’t shy about using that radio voice to quarrel with a bad call. She always kept track of her (many) nieces and nephews, too. Ann is survived by her son Jeff, of Phoenix; her grandchildren Allison, Ryan (and his wife Mandee), Marnie Kenner (Rich), Ann Shively (Trevor), Andrew, Amelia and Cole; and five great-grandchildren. She was preceded in death by her husband Russ, in 2000; son Stephen, in 2007; and son Rusty.