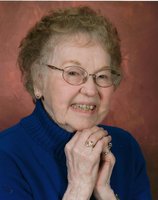 Phyllis was born and raised in Tennessee and attended Blue Mountain College in Mississippi majoring in music. She went on to live and work in Georgia for a while before returning to Tennessee, where she met her future husband, Vance, at Dyersburg Army Air Base. He was the love of her life for 56 years. She and Vance, a former B17 pilot then moved to Colorado in 1945. They settled west of Sterling to a small farm and adopted two children, a daughter named Diana Lynn and a son named Robert Wayne. Her teaching career began in 1954, where she began teaching in Logan CO, in the town of Willard for grades 1 - 4. The Willard school was a tight knit community school. The classrooms were divided into two sections. Grades 1 - 4 were in one classroom and 5 - 8 in the other. There were no specialty classes, so the teachers did it all, which included physical education, school plays, dancing, potlucks, and helping with handicapped and disadvantaged children. Phyllis developed many fond memories from those days; teaching students everything from making leather handbags, to learning folk dancing, and playing ball games at noon in addition to all their regular lessons. Phyllis received her master’s degree in education from Greeley, Co. Her husband, Vance and mother-in-law made huge sacrifices of their time so she could obtain her teaching degree. Vance was a farmer and that takes considerable time and effort to maintain a farm. With their help, she was able to take correspondence and night classes and attend summer school at UNC, (then it was CSCE) and received her BA degree in 1960. She continued her education and received her M.A. in 1965. Getting her teaching degree from Greeley was one of the best career decisions she ever made. She taught fourth grade at Sexton school in Sterling, which has now been replaced with other buildings. She moved from Sterling to Boulder in 1967. Phyllis taught both second and third grades at Foothills, Flatirons and at Heatherwood. She made lifelong friends during those wonderful years. She taught and tall retiring in 1982. She and her husband enjoyed traveling in their fifth wheel to Tennessee, Florida, and Texas, Arizona and California, to name but a few. They also enjoyed taking cruises to Alaska the Caribbean and trips to Europe. They moved to Longmont, CO in 2000. Their son, Bob died in 1990 and her beloved husband, Vance in 2001 but she stayed very busy and active with many different interests. She enjoyed being a part of the Red Hats, Bible study, Book club; Faith and Fan Club (a senior outreach activity of EBBC); Retired Teachers Association; Daughters of the American Revolution (DAR); exercising in the pool where she had been a member of Health Ambitions since the summer of 2000; massage, acupuncture, reflexology, and touch therapy and being an all-around social butterfly. She spendt as much time as possible with her daughter, grandchildren, great grandchildren, who also live in the area. She loved and doted on her two spoiled kitties Freckles and Bear. Her grandson Brian often said that if you looked up the word “lady” in the dictionary you would see her name listed as one of the sweetest and kindest women you'll ever meet. Funeral services will be held on Wed. December 2, 20220 at Reclamation Church (formerly East Boulder Baptist) 7690 Baseline Rd. 80303, streaming details are the church website http://ebbc.co/ and live stream at https://www.youtube.com/channel/UCaLUBh5fdIeRPma6dvZ5X0A/featured , visitation will begin at 10:00 A.M. followed by the service at 11:00 A.M. Private family burial, Ft. Logan National Cemetery, Denver. Social distancing and masks will be required in accordance with state guidelines.