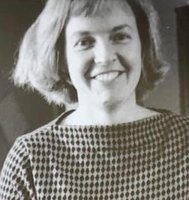 Geraldine Ann Kowalczyk (née Johnson), 88, of Boulder, and in recent years, of International Falls, MN died on July 4, 2020, at AltaVita Memory Care Centre in Longmont, Colorado. She will be interred beside her husband of 27 years, Michael Richard Kowalczyk, at the National Cemetery in Santa Fe, New Mexico. A celebration of her life will be held at a later date. Gerry was born on March 20, 1932, in International Falls, MN, one of four daughters of John Engvald Johnson and Emma Virginia Johnson (née Strand). After graduating from Orr (MN) High School, she earned her teaching certificate from Bemidji State Teachers College. After two years teaching in Rochester, MN, she telephoned the Superintendent of Schools in Bend, OR, was granted a phone interview, and was then offered a teaching job over the phone. She packed up her car and headed West on her own. In Bend, she met her future husband, Michael, who was stationed at the military base there. The two were married on August 10, 1957, in Silverdale, MN. In the late 1970s, Gerry earned her B.S. in Education from the University of Oregon. In addition to a love of teaching, Gerry was a talented artist who enjoyed painting, sculpting, copper enameling (from her earliest years and which she continued to enjoy in her Memory Care home). Of her younger years and talents, her sister, Dolores Jacobson of Mahtomedi, MN writes: "We grew up with few luxuries, but never felt deprived and were enveloped by the Swedish and Norwegian traditions of our grandparents. Our cousins were our playmates in rural Greaney and became our dearest friends as adults. We recognized Gerry’s artistic talents early on. She drew paper dolls and clothing for us as children. Uncle Norman made an easel for her 15th birthday and gave her oil paints and a book with instructions. She painted her first oil on canvas that year, the neighbor’s barn which hangs in my sunroom. She was generous with her talents, sketched pencil portraits in minutes and encouraged others to try drawing and painting." Gerry was a loving mother who opened her home to exchange students, friends old and new, and especially those in need. She was caring, compassionate, and always quick to share a smile, or a joke. In her later years, she treasured the companionship and care of Frank Watkinson, of International Falls. She looked forward to Frank's nearly daily telephone calls right up to the end of her life. Gerry is survived by her children Pamela Larson, of Duluth, Carolyn Lunn, of Lafayette, CO, Kathryn Kowalczyk (Erik Park), of Boulder, CO, Christine Kowalczyk-Ritter, of San Antonio, TX, Michael J. Kowalczyk (Sarah), of San Geronimo, California, Duc Van Nguyen, of Albuquerque, NM, Karsten Hohage, of Weinheim, Germany, and Rie Akiyama (née Tsukioka, of Tokyo, Japan. She is survived by her sisters Marilyn Cook (Val), of Orr and Dolores Jacobson (Don), of Mahtomedi, by 13 nieces and nephews, and by 16 grandchildren and 12 great-grandchildren, all dearly beloved. She was preceded in death by her parents John and Emma, her husband Michael, her sister, Beatrice Spaulding, of Bemidji, and her son Stephen, of Fort Hood, TX. In lieu of flowers, the family suggests contributions to www.feednmkids.com, an organization that provides meals to underprivileged children in Gerry's beloved and longtime home of Albuquerque, NM, where she taught elementary school for many years.