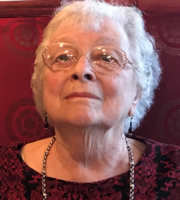 One year ago, Barbara Sciaky’s long and fulfilling life—which centered on children, music, food, gardening, quilting, family and friendships—came to an end. She was 90. Barbara was born to immigrant parents Gladys (Zimmerman) and William Altstadt in New York City. She had one sister, Judy, three years her elder. Barbara was an eager and excelling student in school, graduating early from Julia Richmond High School and Hunter College, both in New York. At summer camp, which she attended from an early age, and together with her older sister, she fell in love with square dancing and folk music. The two sisters attended the weekly gatherings of Margo Mayo’s American Square Dance Group in the 1940s, as well as appearing on Mayo’s weekly WNYC radio show. In 1946, Mayo recommended Barbara for a job as counselor at High Peak, which was a new summer camp near Catskill, New York. She was hired for the job and it was there she met Peter Sciaky, the son of camp directors Frances and Leon Sciaky. Less than two years later, she and Peter married. After her graduation from Hunter College and up until their daughter Carla was born, Barbara worked as a nursery school teacher at The Little Red Schoolhouse. Not long after their son Noah was born, Peter’s career in petroleum geology took the family from Brooklyn, New York, to Boulder, Colorado, where their son Loren was born. Barbara went back to school at the University of Colorado Boulder to get certified to teach public school, and then went on to get her master’s degree in primary education. She worked as the first-grade teacher at Mapleton Elementary School from 1971 until her retirement in 1991, garnering a reputation as a pioneer and model teacher of a progressive open classroom. She created a dynamic, student-centered classroom where kids learned to love learning. She was particularly captivated by young children and had a fierce belief in their creativity, wisdom, and potential. As a former student put it, “She nurtured students along their unique learning paths,” and her classroom was a haven of experiential learning. After she retired from teaching, Barbara took up the hobby of quilting and discovered she had quite an eye for color and pattern. She was also a knitter, producing many adorable sweaters for children in homeless shelters. Throughout the years Barbara and Peter were always avid gardeners. She especially loved roses and had many varieties growing in their plentiful gardens. After Peter died in 2009, she tended his collection of exquisite orchids. At the behest of a friend, Barbara joined a writers’ group and began putting together a collection of captivating stories from her years as a classroom teacher. In her last years, Barbara spoke often about her life and experiences. She reminded us that she was fortunate to have had such a good life, and while she acknowledged life’s troubles, her focus was steadfastly on the good times. She died of old age, peacefully, in her sleep. She was preceded in death by husband Peter and sister Judy, and is survived by daughter Carla, her husband Dan, and their children, Chloe and Rachel; son Noah, his wife Julie, and their children Simon and Lilah; and son Loren. We still intend to have an in-person celebration of Barbara’s life and will schedule it when we all feel it is safe to do so. Sign up at https://barbara.sciaky.net to be notified. Donations can be made to Golden West Senior Living, Emergency Family Assistance Association, TRU Community Care, or your favorite democratic, liberal or human rights organization. Thanks to Murphy & Associates Funeral Directors.